Deadly Premonition: The Director’s Cut Launch Giveaway – “Hey, Zach, have a cup of coffee on us”

Greetings all, David Bruno, the North American public relations representative for Rising Star Games here. You may have already heard the news, but in the instance that you haven’t, last week we released Deadly Premonition: The Director’s Cut across North America. And to celebrate the game’s release we feel that a little fan appreciation is in order. After all, The Director’s Cut wouldn’t have been possible without you, the fans! So we want you to have a cup of coffee on us so to speak.

Starting today, Tuesday, May 7, through Tuesday, May 21 (that’s a whole two weeks) head to your favorite coffee shop, order your favorite drink, and tell the barista that your name is “York” when they asked for your name to write on the cup. I know, I know, this may be a bit difficult if you’re not paying with cash and happen to be using a credit/debit card: they’re gonna’ be all like “…but sir, your card clearly reads David Bruno on the front, and it’s even signed as such on the back.” This is where you get to be all super slick like and bust out the “Just call me York; that’s what everyone calls me” line. Awwwww yeah.

Once you pick up your tasty beverage here’s how to enter: snap a picture of the name “York” as appears written on the cup by the barista and tweet the following message:

Your entry should look somewhat similar to this: 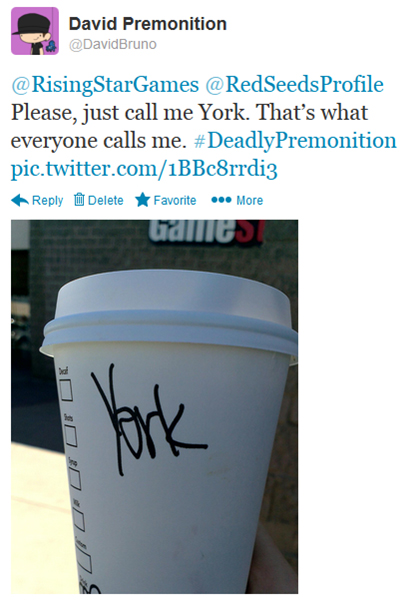 IMPORTANT: Please be sure to follow us on Twitter so we can message you in the instance that you win one of the following prizes up for grabs.

Here’s how we’ll pick the winners: After the two-week entry period ends on Tuesday, May 21 at 11:59PM PST, a drawing will be held at random to select the winners using http://www.random.org. You may enter once per cup, per person, per day…basically once a day. Please keep the pictures “safe for work.” I know how wild and crazy you kids can get. 😉 Open to North Americia only