Below are my strategies for defeating the bosses in Deadly Premonition. Needless to say there are some major spoilers! 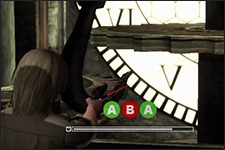 An example of a dodge button combo.

This boss battle isn’t too difficult, simply shoot Thomas and dodge one of his three attack style whenever prompted: 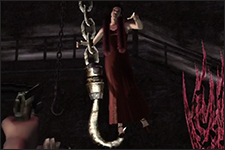 The best moment to get in a lot of shots in is when Thomas stands on that large hooked chain! Listen for the horn and be prepared to lock on when he starts swinging towards you. Complete all the button prompt to dodge the swing and then target him again while he’s stationary and rising to the ceiling.

During the Map to Psychic Spot C Side Mission Thomas will go down in 5 direct hits from the Magnum.

Like Thomas George has several attacks that involve quick time events to evade: 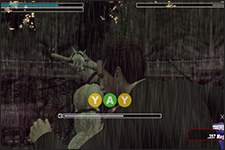 An example of a dodge button combo.

George is only vulnerable on the scars on his back which are unfortunately only exposed briefly after he attacks. The magnum is best weapon to use during this fight since it’s the strongest firearm and it’s easier to target the limited area at a distance and prevent getting caught in a quick time event. 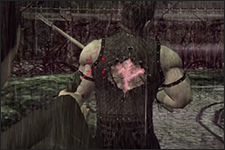 Aim for the scars!

To get in a good shot hold your ground and wait for George to charge forward. Side step his attack by hitting the bumpers, then complete a quick 180 and shoot his back once it is exposed after his initial axe swing. Be careful though, if you are too close to George a quick time event will occur which will cause York to dive off to the side and you’ll miss your chance to shoot.

Another good opportunity to hit George is when he stands still and taunts York. Listen for the sound of his axe hitting his hand then run around and target his back before he moves.

After a direct hit using either method above George will fall to his knees and momentarily leave his back exposed for a second shot. Try not to miss this opportunity!

Using the magnum you can deplete George’s life bar in just six direct hits. George is a bit tougher during the Map Quest C Side Mission and will take eight direct hits. 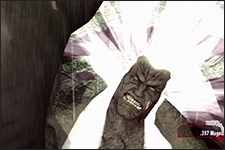 George is bigger but his attacks are the same:

Continue using the magnum and repeat the offensive tactics used during the first phase of the battle. His life bar should completely deplete after six direct hits. George is a bit tougher during the Map Quest C Side Mission and will take eight direct hits.

This last portion of the battle is super easy. George stands in place and throws the axe towards York. Switch to the machine gun and shoot the axe as it flies toward York’s head. Once you hit it enough times the axe will change direction and fly directly into George’s chest.

Kaysen has two attacks can be evaded by completing simple quick time events: 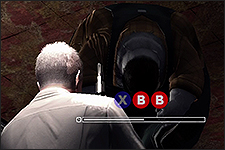 This battle is simple but a bit tedious since it takes quite a bit of ammunition to take Kaysen down and he’s only vulnerable briefly in certain positions. It also doesn’t help that the most powerful range weapon in your arsenal, the Infinite .374 Magnum, only holds four bullets at a time so you’ll only get a few shots in while Kaysen’s vulnerable before you are forced to reload and the time window to inflict damage has closed. 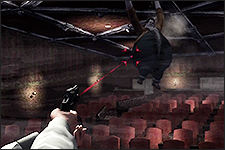 First thing you want to do is make sure the Weather Doll is in the upright position in your inventory so Zach’s health will slowly reload if he is ever hit by one of Kaysen’s attacks.

Shoot Kaysen 1-2 times with the magnum and make him drop from ceiling. Since his back is invulnerable it is best to wait until Kaysen is facing Zach straight on before taking any shots so you won’t waste time and bullets shooting him with no effect. You’ll know when you’ve made a direct hit on Kaysen when purple blood spurts out of him from where you made a shot. 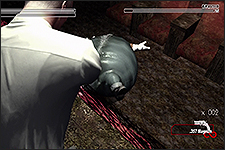 Kaysen struggles to get back up.

Once Kaysen falls to the floor to he’ll perform his roll attack so reload your gun as soon as he lets go of the ceiling then be ready to move out of the way as soon as he shoots towards Zach. If you are successful in evading the Kaysen’s roll attack he’ll land in the middle of the front row on his back and struggle briefly to get back up. While he’s in this vulnerable position lock on an fire at him. It’s possible to get at least four direct hits before Kaysen returns to the ceiling and repeats his attack cycle. 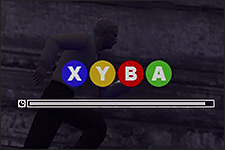 Kaysen chases Zach down a long winding staircase and will attack whenever even he gets too close. To evade these attacks you must press the correct button sequence that flashes on the screen. 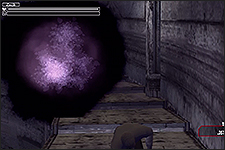 Since you only have to run for the most part during this sequence it may seem like a piece of cake but like the previous Raincoat Killer chases Zach’s movement is unfortunately controlled by wiggling the left analog stick side to side… which you will have to perform constantly for roughly 3 minutes before to making it to the exit.

The best strategy in this fight is to immediately turn the Weather Doll in your inventory upside down so Zach’s health will slowly reload if he’s hit then pause the game every now and then to give your hand a break from the frantic side to side motion.

During this last fight sequence Kaysen has three main attacks, two of which can only be avoided by physically moving out of the way: 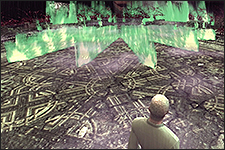 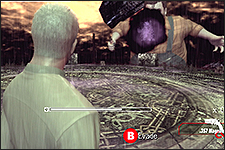 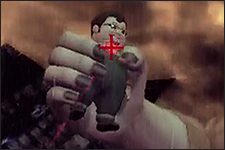 Aim at the doll

Before you attack Kaysen make sure the Weather Doll in the inventory is turned upside down so Zach’s health will slowly reload if he’s ever hit.

Kaysen is only vulnerable through the small doll clutched in his right hand which unfortunately is a bit hard to target at a distance so you you’ll have to get pretty close to the guy. With the magnum equipped aim at the doll’s face and chest and fire only when the cross hairs form a cross. Unfortunately auto aim is useless in this situation since it will only target the large and invulnerable Kaysen and not the doll. When you’ve made a direct hit you’ll see purple blood spurt from the doll and the large Kaysen howl in pain. The doll is briefly invulnerable during Kaysen’s pain animation so use this time to reload your gun and only take additional shots once he has settled back down. 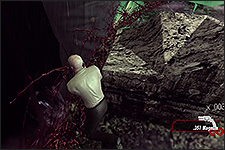 Cram Zach into the corner

If you had to purchase a Magnum from Panda Bear because you neglected to complete Side Mission #11 you may be running low on ammo by this point. Luckily there’s two boxes of [.357 Magnum Bullets] and three boxes of [5.56mm x 45 Bullets] hidden within the boxes scattered around the roof of the clock tower. Kaysen may even end up breaking a few of these boxes open for you when he deploys his energy attack.

Speaking of which… his green energy attacks are pretty annoying given their frequency and the need to move a safe distance away from Kaysen to evade. Since it is hard to target the doll at a distance you’ll waste time returning to Kaysen’s side again and run the risk of a repeated energy attack before getting more than a few shots into the doll. 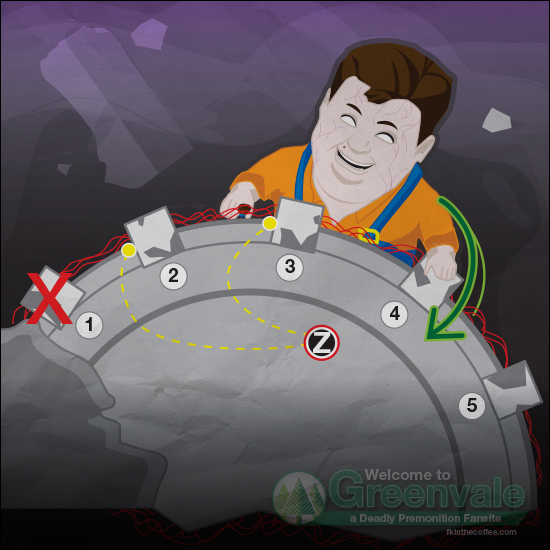 Fortunately there’s a way to protect yourself from this attack without having to run too far away from Kaysen using the broken pillars around the perimeter of the clock tower. Since Kaysen’s attack flows from his left hand cramming Zach into the corner of one pillars near the hand holding the doll should block both the initial shock wave and the resulting energy blast.

It’s a bit hard to put into words so I’ve made a little visual diagram to explain what I mean.

Based on Kaysen’s current position Zach should be safe from the energy attack behind both Pillars #2 and #3. (Please note: you can never hide behind Pillar #1 due to the debris preventing Zach from wedging himself all the way into the corner.)

If Kaysen shuffles too far to the left and the hand holding the doll is directly over Pillar #2 or #1 leaving no where to hide on the left side of the area you may be able to hide behind Pillars #3 or #4 but it is not guaranteed you will make it in time and you may be hit by a stray energy beam.

This hiding behind the pillar method works best when you have have at least one or two pillars between Kaysen’s left attack hand and Zach… meaning Kaysen needs to be somewhere between Pillars #3-#5. If Kaysen ends up hovering between Pillars #1 or #2 it is possible guide him towards the right side of the area by essentially running over to that side and wait for him to shuffle closer to you. 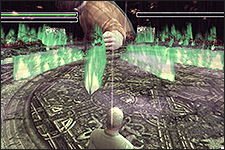 Kaysen slams his fist down.

Though honestly you probably won’t have to guide Kaysen back to the right too often as he generally stays near the center of the area for most of the fight.

Kaysen’s lifebar should deplete after approximately 24 or so successful shots into the doll though it he’s a bit tougher during the Map to Psychic Spot C side mission and will take around 34 direct hits. Once this occurs he’ll turn his back to Zach and hide the doll in his front overall pocket. When the doll is safely tucked away Kaysen will yell “This is the end, Zach” and slam his fist into the ground and release another energy attack. 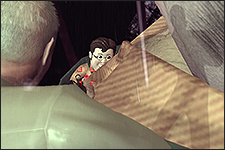 As soon as Kaysen turns equip the infinite 10mm Machine Gun. After he slams his fist down dodge the resulting energy attack then climb onto his fist and run up his arm. Once you are on his shoulder aim the gun down at his chest and spray the top of the overall pocket with bullets IMMEDIATELY. To end this fight you only need one bullet to hit the doll which is quicker to achieve with a wide spread of bullets over the entire pocket area.

If you make it onto Kaysen’s shoulder and fail to shoot the doll during a brief time window Zach will be thrown off the shoulder and back onto the floor. Kaysen will regenerate all of his life and you’ll have to deplete his life bar once more before you have another opportunity at shooting the doll from his shoulder again. If you mess up the quick time sequence that appears Zach will also take damage from the fall back onto the ground.