Deadly Premonition Director’s Cut Preview – My Impressions along with Images and Screens Galore!

So if you guys have been following SWERY on Twitter and Rising Star Games on Facebook the past two weeks you have probably noticed that a Deadly Premonition Director’s Cut ‘World Tour’ has been going on.

Rising Star Games along with Swery and Deadly Premonition Producer, Tomio Kanazawa, made stops in France, Germany, England and two cities in California to promote the upcoming release of the game. I was able to attend the preview in San Francisco and get a sneak peek along with a bunch of new details and screens from the Director’s Cut! 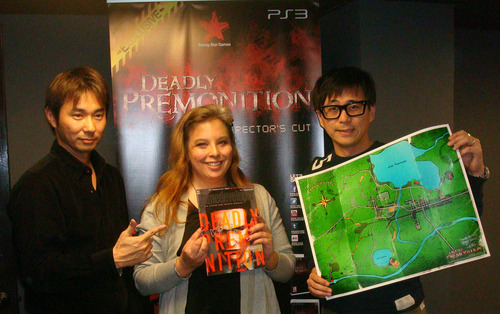 Tomio Kanazawa, me and Swery at the SF preview event. I’m holding my newly signed GDM, and Swery is holding up one of the Greenvale Map posters I made for him and Tomio!

According to the product sheet provided by Rising Star Games the Director’s Cut is expected to ship April 30th and will also be available as a day-one digital download on Playstation Network.

The most controversial game in recent years returns in this special director’s cut. Unofficially the best game of the year (2010) according to fans and critics alike, Deadly Premonition split the gaming community right down the middle and earned itself cult status for its memorable cast and story.

Now given the special edition make-over, this Director’s Cut features a new branching ending as well as numerous bonuses guaranteed to relight the match on this debate.

The ultimate cult favorite returns bigger and better than ever…isn’t that right, Zach?

So What’s New and Improved in the Director’s Cut? 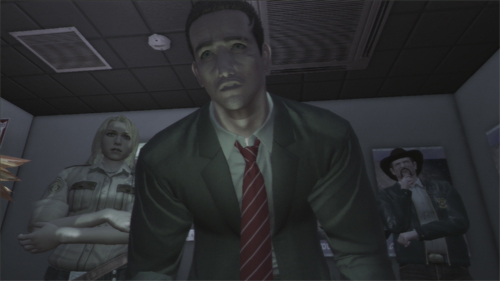 Deadly Premonition’s success back in 2010 was due to the game’s amazing storyline and characters so Swery said that was important that this aspect of the game stay intact in for the Director’s Cut. To help answer lingering questions provide a deeper understanding of the storyline though Swery included several new scenarios – including a new prologue and epilogue (featuring a brand new character)- exclusive to the Director’s Cut release.

– Director’s Cut is easier to play.
Even though the original game was praised for it’s amazing storyline, its gameplay was often criticized for being much too difficult. During the press event it was mentioned that the game’s difficulty had made some players give up entirely and resort to just watching cutscenes online to see how the story played out. It was very important to Swery that in the Director’s Cut the storyline would be accessible to more casual gamers, so the original 3 difficulty options have been removed and in favor of a single difficult setting that ranks somewhere between ‘easy’ and ‘normal’ mode.

– Controls are revamped and completely customizable.
Director’s Cut default controls will be similar to those in other modern open world games like Grand Theft Auto or Red Dead Redemption but will also give you the option to customize them. Like in fighting games, Director’s Cut will allow players to map functions/actions to any button so they can tailor the controls to their own comfort.

– In game map has been improved… somewhat.
The map was a major frustration of players of the original Deadly Premonition. To improve navigation in the Director’s Cut the small GPS map in the left corner of the screen can now enlarge and will overlay the screen in real time so you know exactly which way you are moving on the map. Unfortunately, the map still doesn’t zoom in or out but with this new overlay feature on the screen navigating Greenvale is definitely easier! 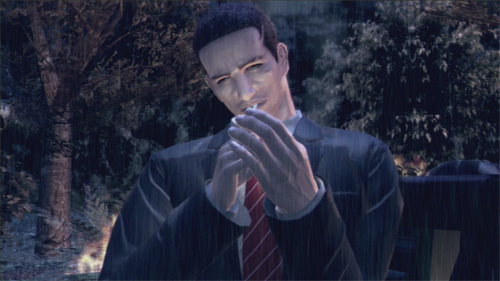 · Updated textures and other graphical improvements

The Greenvale we know and love has been given a major graphical overhaul in the Director’s Cut featuring completely redrawn and High resolution textures, improved lighting and even new shading. I have to say after seeing the Director’s Cut in action the screens in the image gallery below really don’t do the visual improvements justice!

The graphic style of the original remains the same but with the new textures and the improved lighting there’s a level of polish apparent in the Director’s Cut that is just not present in the 2010 release.

While watching the gameplay I was immediately struck by all the new details added to the environments in Director’s Cut especially those seen in the foliage, building exteriors, and items.

Below are some comparison images I’ve made combining Director’s Cut screens provided by Rising Star Games and my own screens of the Deadly Premonition 2010 Xbox 360 release:

The graphical improvements in the Director’s Cut are not just limited to the game’s environments. It’s also clear that many of the character textures have new details as well and was most noticeable for me when we first see Anna Graham in the opening cinematic. (I really wish I had a screen of her to show you guys!) Additionally the game HUD, loading screen item images, and even the collectible trading cards in the game have also been given fresh facelifts in the Director’s Cut. 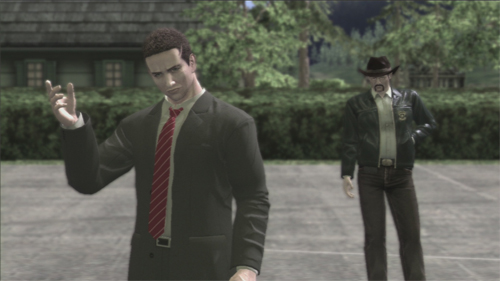 Additional content will be available via the Playstation Network including new costumes for York and the residents of Greenvale as well as usable items, cars, and even housing. The Director’s Cut will also have trophy support with approximately 50 awards planned!

Screens and Images from the Director’s Cut

My photos from the San Francisco Preview

I never thought I would get to meet the developers of Deadly Premonition! I’m still in shock a bit. They were both super nice and I got to give them both a hug! They loved the Greenvale map posters I made and Tomio was thrilled with the set of my handmade DP trading cards I gave him too! (I had already given Swery a set back Christmas 2011)

I really can’t wait to try the Director’s Cut for myself this April and I predict that with all these new additions and improvements I will be spending another 200+ hours exploring Greenvale. Are you guys as pumped as I am? What are you looking forward to seeing most in the Director’s Cut? Let me know in the comments!